Familiar with the benefits of Odoo, all SilencerCo wanted to do was upgrade their current infrastructure of their ERP system. With their previous Odoo partner not meeting their standards - needless to say, SilencerCo wasn’t happy with the implementation. As such, they sought out another Odoo partner. Seeing Bista Solutions rank as highly as it does on Odoo’s partner page, they decided to reach out to the Bista team in order to improve their Odoo ERP system. The primary goal was scalability.

Even though there were challenges throughout the process, both parties - Bista Solutions and SilencerCo - persevered through the unexpected.

As a three-time Best Odoo Partners in USA and a 2021 Best Partner Nominee in North America, the Bista Solutions team used their experience and skill-set to right certain wrongs in order to help SilencerCo experience the full benefits of Odoo. At the end, all the goals were met as per the requirements.

The story begins when two men came together to actualize their one goal: to make guns as quiet as possible. The birth of SilencerCo followed that decision, and a company was established in the mountains of the American West in 2008. Ever since its creation, SilencerCo has been producing silencers for arms - while simultaneously searching for more ways to make them quieter, more durable, lighter and even shorter. A significant achievement has been the creation of the first non-round pistol silencer with Osprey - known as the quietest and easiest cleaning rimfire silencer with the Sparrow. This arm is the only commercially-viable, fully-modular shotgun silencer in existence with the Salvo 12 and now the first integrally suppressed 9mm pistol that is holsterable and hearing safe with all factory ammunition – the Maxim.

SilencerCo had Odoo version 9 implemented by another Odoo partner - and while the system worked fine for a while - it simply wasn’t fulfilling the company’s requirements as time progressed. Additionally, the infrastructure was quite complex on the back-end, making it difficult to decipher. As such, both SilencerCo and Bista Solutions discussed options and made the decision to migrate from Odoo v9 to Odoo v13. The Bista team only had one objective following the migration; create a better infrastructure (i.e. easy system set-up) that was scalable.

In December of 2019, two members of the Bista Solution team went to visit the client on-site. This was done in order to better understand the client’s daily operations as well as to determine what the best approach to this implementation was.

Upon deciding on migrating SilencerCo’s Odoo ERP to version 13, there were a few unexpected setbacks due to the version 9 infrastructure. The biggest challenge was the server configuration. The code in version 9 wasn’t written correctly by the previous partner. As such, it took the Bista team a while to get that sorted. However, with how time-consuming it was becoming, the technical team that was assigned the project made the decision to write the code for version 13 from scratch. The only thing that was imported from the previous version was the master data - everything else was new; and created with the main objective of a better and simple infrastructure in mind.

Camille Thompson - who is a Data Manager at SilencerCo - oversaw everything from the beginning. As the coordinator between the Bista team and the operational team at SilencerCo, she was the first point of contact after every discussion or change. The process was simple. The Bista team would prepare a demo and present it to Camille. If she liked what she saw, she would ask the Bista team to deploy it. If she had feedback, she would create tickets for the Bista team to work on or review it further by herself or with the team at SilencerCo - in order to come to a decision. Once Camille was satisfied with the decision, Bista Solutions would move forward to the production stage.

The implementation itself was a little scattered due to the nature of changes over the course of the project. The Bista team was initially hired to improve the current infrastructure of Odoo version 9, however upon closer inspection a migration task was put into place. In June of 2020 Odoo version 9 had been improved and was ready to go, however by July 2020 the migration to Odoo version 13 had begun. The results of the project went live in January 2021. It would have been sooner if the decision to write the code from scratch had not been made. However, the decision was necessary and SilencerCo has since reaped many benefits from the migration.

Working with the Bista Team

SilencerCo’s team claimed that the previous Odoo partner simply did not have the right resources or knowledge of Odoo version 9 that the company needed at the time. As a result, SilencerCo’s Odoo version 9 was heavily flawed and a lot of out-of-box functionality did not work. That’s when the Bista team stepped in and completed the task in an effective and timely manner - as requested. Camille says, “Bista was very responsive to our needs. The amount of customization that was needed to support our government compliance needs was extensive and they managed and worked through these hurdles effectively and efficiently.” Needless to say that the team at SilencerCo enjoyed working with the Bista team and would recommend Bista Solutions to other companies in and beyond their industry.

While the Odoo version 9 was not working well for SilencerCo - the Odoo version 13 upgrade resulted in the opposite. In fact, the Odoo V13 upgrade allowed the company to control inventory more effectively, use out-of-box planning tools, and manufacture their entire product catalog and much more. 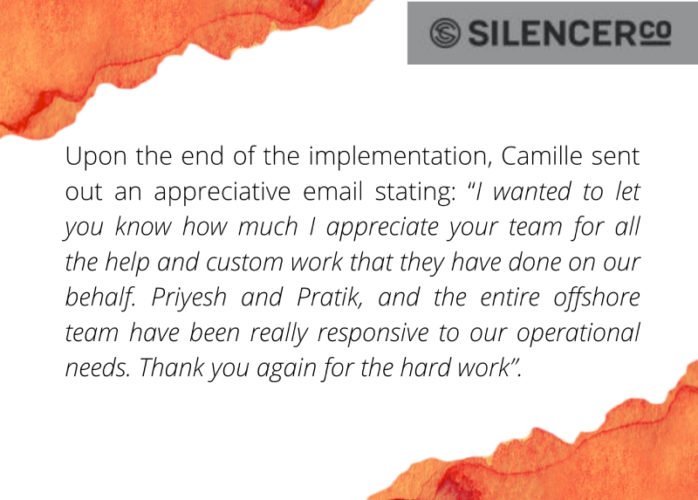 Even though the implementation has been completed, the Bista team is still working with SilencerCo on other projects. Camille recently stated that “working with Bista has been great” and that “they have been responsive and timely with all our past and ongoing projects.”

The Bista team ensured they delivered on their word, and they are grateful for SilencerCo’s kind words.