Most real-world datasets include a certain amount of anomalous values, generally termed as ‘outliers’. These observations substantially deviate from the general trend therefore, it is important to isolate these outliers for improving the quality of original data and reducing the adverse impact they have in the process of analyzing datasets. Practically, nearly all experimental data samples are likely to be contamination by outliers which reduce the efficiency, and reliability of statistical methods. Outliers are analyzed to see if their unusual behavior can be explained. Sometimes outliers have “bad” values occurring as a result of unusual but explainable events. The cause of outliers are not always random or chance. Therefore a study needs to be made before an outlier is discarded.

The simplest method of identifying whether an extreme value is an outlier is by using the interquartile range. The IQR tells us how spread out the middle half of our data set is.

The interquartile range, or IQR, is determined by subtracting the first quartile from the third quartile. 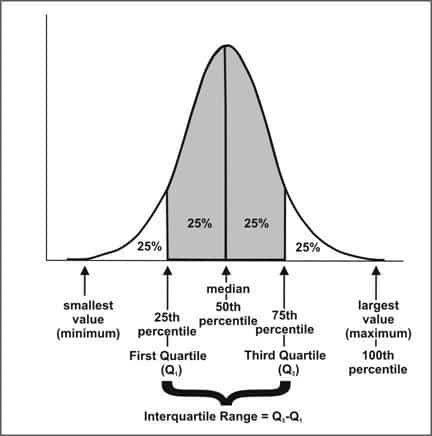 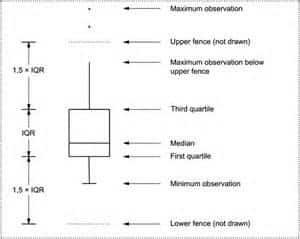 The presence of outliers indicates errors in measurement or the occurrence of an unexpected and previously unknown phenomenon. It is extremely important to check for outliers in every statistical analysis as they have an impact on all the descriptive statistics, as they are sensitive to them. The mean, standard deviation and correlation coefficient in paired data are just a few of these types of statistics. This could mislead analysts into making incorrect insights as all these statistics get distorted.

Certain statistical estimators are able to deal with statistical outliers and are robust, while others cannot deal with them. A typical example is the case of a median. It is the most resistant statistic with a breakdown point of 50%. Which means that as long as no more than half the data are contaminated or missing, the median will not deviate by an arbitrarily large or small amount.

In practice, an outlier could cause severe damage to data-driven businesses. For example, outliers in transactional data of retailers or distributors could lead to the incorrect calculation of demand forecasts. Leading to a mismatch of demand and supply as the business either ends up understocking and overstocking its inventory. Other adverse outcomes could also include; inaccurate budget planning, non-optimum resource deployment, poor vendor selection, loss-making pricing model et cetera.

Even engineering firms or manufacturers can be adversely affected by outliers. Errors in measurement taken from sensors (eg. thermometers, barometers) during quality checks of the products produced, could result in unexpected failure of products, incorrect measurement of warranty periods, initiate re-designing of products et cetera.

The adverse effects of outliers could even influence the life of citizens when data collected by the government contains outliers. Biased samples in government surveys, containing observations which would’ve been considered outliers when compared to the entire population, could justify the formulation of policies that could damage society. Thus, it is imperative to devise methods of dealing with outliers in statistical analysis.

The treatment of outlier values can be achieved by the following categories of actions that can be taken:

If you’d like to implement software involving forecasting for your business, you can reach out to us using our contact form or at sales@bistasolutions.com.